Set in 1943, somewhere in Italy, a unit of British infantry accompanied by 2 Churchills have to capture a German held town. The Germans have half the infantry but one formidable Tiger tank. 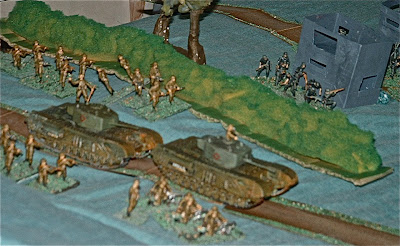 Turn One: The Churchills start driving down the road by the hedge towards the town. British infantry accompany the British tanks.

The German Tiger starts entering the town it guards. 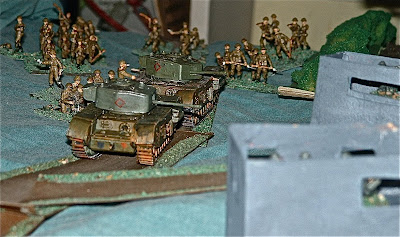 British Churchills aiming at entrenched German infantry in the buildings. Some infantry get hit by the firing.

Turn Two: Churchills engage the German Tiger tank. The tanks are in a stalemate since the Churchills 6 pounders cannot breach the Tiger tanks armour and the Tiger's 88 rounds are having trouble piercing the Churchill armour. 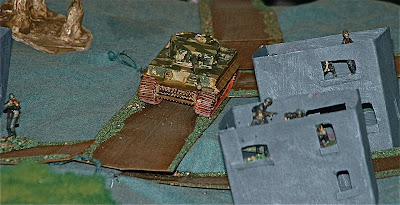 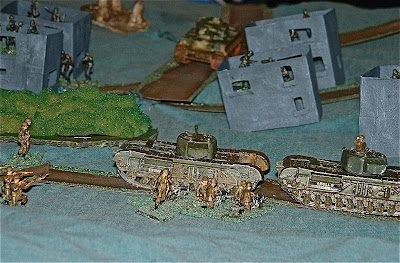 British infantry start preparing for a charge into the town while under German fire. 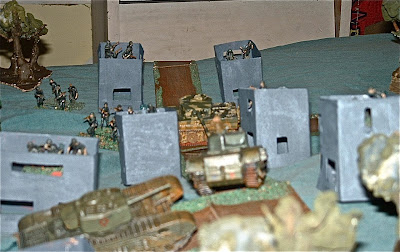 Turn Three: The Churchills start moving into the town. The Tiger tank moves to block their advance. No tank has has breached armour yet. German infantry in the buildings are unable to hit the Churchills. 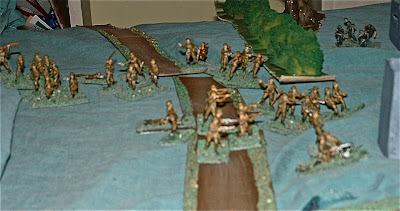 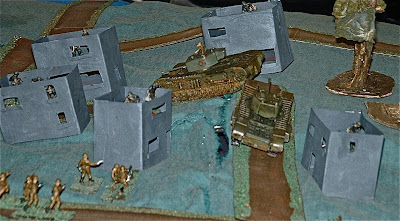 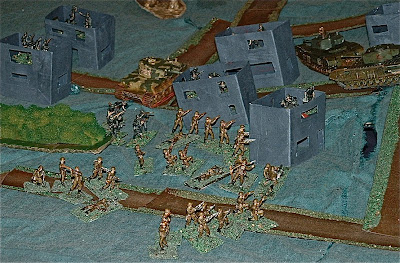 Turn Four: British infantry continue the charge with more heavy casualties. However they are almost in the town. A foolhardy German commanders sends some troops to attack the British infantry flank. The attack fails. 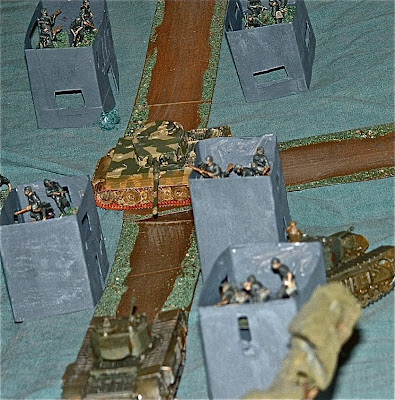 In order to break the stale, the the front Churchill has commenced a flanking action to get a clean point blank shot at the Tigers rear. No tanks have been pierced yet. The second Churchill aims to keep the Tiger distracted.

The infantry charge continues to take casualties. The Germans look like could hold off the assault.

Turn 5: The Churchill tank finishes the flanking manoeuvre and puts a shell in the Tiger tanks rear. It is does not finish it off. The 2nd Churchill fires a shell on the damaged Tiger and finishes it off.

The British infantry charge has gained a foothold but massive casualties were inflicted upon it. German infantry start getting pushed out of the town.

In the end the British infantry charge caused more casualties than needed be. It is a British Pyrrhic Victory. The British took the town but with a lot of casualties. The German succeeded tactically but they needed to hold onto the town to claim victory.
Posted by The WW2 Plastic Soldier at 4:48 PM

It is called 'Wargaming Not the Usual Suspects'. It is a good guide to making armies of the inter war years using other brands. Like for Greeks use WW2 Italians and paint them olive green.
http://www.compulink.co.uk/~pockets/ntus.htm
Posted by The WW2 Plastic Soldier at 4:22 PM